What are eye floaters?

Perhaps you or someone you may know has been seeing squiggly, cobweb like anomalies that appear every so often across your field of vision. Additionally, you may also be experiencing flashes of light in peripheral vision. These obstructions to your vision are truly nothing to worry about; they are what we commonly refer to as eye floaters.

Eye floaters are essentially tiny entities that appear to drift around and interact with your vision as your eye moves.

Floaters can take on many shapes and forms, generally each individual has their own unique experience regarding what exactly they see as “floaters”. Generally, eye floaters will resemble dots, cobwebs, lines, or circles. Some people even describe the floaters they see as threads or worm-like objects which range in value from very dark to nearly transparent. 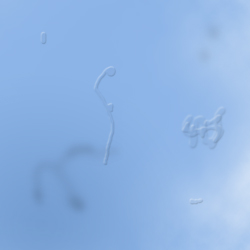 The above image is an accurate depiction of how eye floaters look against a bright background like the sky.

How do people get eye floaters?

Many people often question how eye floaters form because symptoms start to present themselves spontaneously. Although there are a multitude of reasons why a person may be experiencing eye floaters, it should be noted that deterioration of the vitreous humor is the most common cause.

The vitreous humor of the eye is a gelatinous fluid which is composed primarily of water. A protein referred to as collagen is responsible for composing the remainder of the vitreous.

Eye floaters can appear in a single eye or both. More often than not, floaters will seem to stand out more when an individual focuses their vision on a bright background such as the sky. Brightness causes the pupil of the eye to contract and reduces the aperture which makes eye floaters easier to see.

To contrast the above point, eye floaters can disappear when you focus your field of vision against a dark background. Floaters generally have a tendency to sink towards the bottom of the eyeball.

About 7 out of 10 people will experience eye floaters in their lifetime, making this eye condition among the most common in the world. Despite the fact that eye floaters are very common, floaters are generally considered a benign condition, meaning that they are not considered harmful.

Although eye floaters are not considered dangerous in most cases, there is no doubt that the condition is very annoying. For people with a mild case of eye floaters, the brain often learns to adapt and ignore the floaters. Sudden changes in lighting conditions can cause the floaters to re-appear regardless of whether you have a mild or severe case.

Individuals with eye floaters that are on the “severe” end of the spectrum can truly have their quality of life damaged by the eye condition. Generally, a more severe case of floaters implies that the floaters are more apparent and usually larger in size.

Floaters are common as people age but they can also develop in people with myopia (nearsightedness), people with diabetes, or people who have previously undergone cataract surgery. In rare scenarios, floaters can present themselves at the time of birth and persist as a lifelong issue.

Underlying health conditions and trauma to the eye can also be a cause of eye floaters. Uveitis, retinal tears (if red blood cells are released), and asteroid hyalosis – where calcium attaches itself to collagen, are all examples of the above scenarios.

Flashes of Light in Peripheral Vision

Individuals with floaters or flashes of light in peripheral vision should seek medical advice and treatment from a trained ophthalmologist if the condition transitions from a mild case to something out of the ordinary. New eye floaters, a large increase in the number of floaters, or floaters accompanied by flashes of light are all valid reasons to seek medical advice.

For good practice, it is advised to get your eyes examined at least once a year regardless of whether or not you have eye floaters, myopia, or any other eye condition.

In the event of severe eye trauma or an eye infection, blindness and other complications can be avoided if swift medical treatment is sought. A retinal detachment is a medical emergency that can easily result in blindness without treatment.

Although there is not an end-all be-all cure for eye floaters, there are a variety of natural treatments to get rid of eye floaters.

We can all only hope that one day there will be a foolproof cure.

Try to Get Rid of Eye Floaters